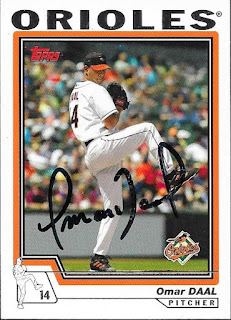 I had some help with a friend from Instagram named Chance to get this card signed TTM from former Oriole, Omar Daal.  Chance has the "Harvey" book that lists addresses for former players.  I use a couple of the forum sites for TTMs, and have had lots of successes, but sometimes I need to send Chance a message or two for guys who's addresses may be missing or confusing.  Daal wasn't listed on any of the forum sites, but since I had this random 2004 Topps in my O's box, I asked him if he knew of an address.  He did, and I got the card signed!