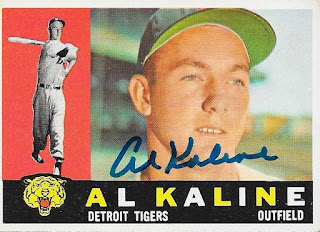 The above 1960 Topps has been in my collection for a long time.  I can't remember how or when I got it, but it was in my vintage box of stars for several years.  Probably back when I first got back into collecting, really.  I don't think I will get to the 1960 set anytime soon, so I went ahead and worked on getting this one signed. 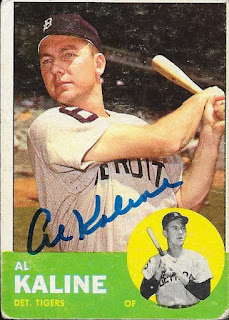 A long, long time ago, I bought a 1963 Topps Kaline as a gift for my friend, Max (not the one in Chicago, the other Max), and thought to myself that the 1963 may be Kaline's best card.  When I decided I wanted to send to him TTM, I went on Ebay and picked a 1963 up so I could send it as well.

Both cards came back looking great, and I am happy that I sent them off.