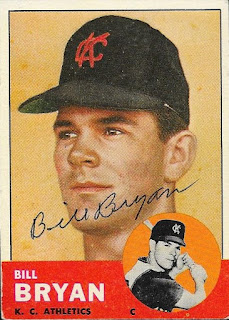 The cards I sent out after the Greenville card show all came in around the same time.  It kind of skews the diversity on some of the pages in my album, but I'm pretty ok with that, anyway.  I really liked this 1963 Topps of Billy Bryan, especially because of the old Kansas City A's hat. 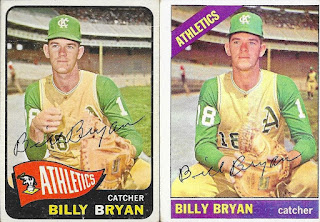 I also liked these cards from 1965 and 1966, mainly because the photos on the cards look to have been taken back to back.  I could be wrong, but I bet that they were successive pictures taken at the same session.

I mailed to Bryan on November 3 and got the cards back on November 17, for a 14-day TAT.
Posted by William Regenthal at 5:37 PM