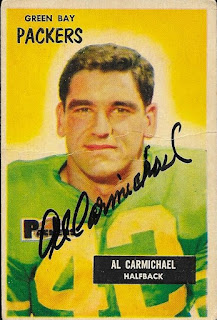 Here is another football success that I was able to get in recently.  1955 Bowman was the original reason I wanted to add some vintage football to my autograph album.  I had a Chuck Bednarik like the above Al Carmichael, but I missed out on getting that one done.  Regretting this, I finally got a 1955 Bowman football signed.  These are really nice cards, and I feel like I did well in choosing which players to send to. 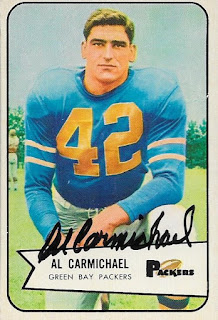 I also got this 1954 Bowman to get signed, and it turned out really nice, as well.  I like the old blue Packers jersey on this card. 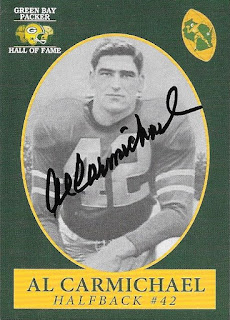 Carmichael also sent a couple of his own signed cards.  They are really nice; they were two of the same card.  I've got a buddy who is a Packers fan, so he may end up with the other one.

I mailed to Carmichael on November 7 and got the cards back on November 16, for a 9-day TAT.
Posted by William Regenthal at 11:50 AM