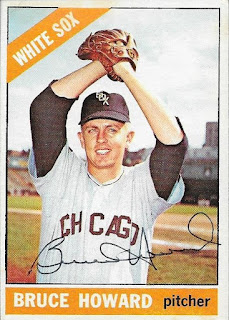 Here is another player that I picked up at the Greenville card show, this time a former Oriole.  I found one Bruce Howard card (below) at the show, then I went online and bought the above 1966 Topps off of Ebay so I could send something else. 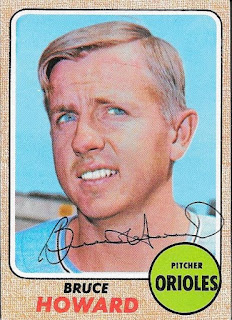 The 1968 Topps is a pretty nice card, even though the Orioles logo is nowhere to be seen.

Howard (b. 1943) played in the majors from 1963 to 1968 for the White Sox, Orioles and Senators.  He had a career record of 26-31 with 349 strike outs and a 3.18 ERA.  His time in Baltimore was very brief, just 10 games during the 1968 season.  He was part of the package sent to the Orioles in exchange for Hall of Famer Luis Aparicio.  The deal was Howard, Roger Nelson and Don Buford to the Orioles for Aparicio, John Matias and Russ Snyder.  Howard would then be dealt to the Senators for Fred Valentine.

I mailed to Howard on November 3 and got the cards back on November 18, for a 15-day TAT.
Posted by William Regenthal at 5:58 PM