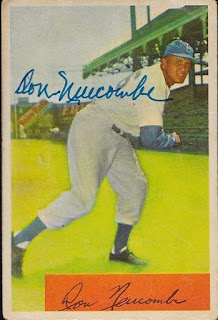 I was watching the opening game of the NLCS and saw that Don Newcombe threw out the first pitch.  I got to thinking about it, and checked to see if he signed TTM.  I saw that he signed at $20.00/card, so I made sure to pick up this nice 1954 Bowman.

Newcombe is one of my favorite former players to listen to when he is being interviewed.  He is a huge part of baseball history, and adding his autograph to my album is great.  This is a really nice card, and looks great signed.