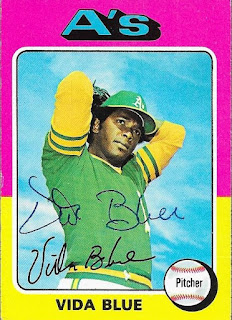 One of the players who had been in my "To Be TTMed" box the longest might have been Vida Blue.  I found out early on that he charged for his signature, so I put the cards of his that I was considering sending into my "charges a fee" slot and kind of forgot about them.  When I started thinning out that part of my box, I made sure to get the Blue cards sent out once and for all.

The above 1975 Topps came out of one of my first deals with my good friend, Max.  I had to make sure that this one was one of the cards I sent. 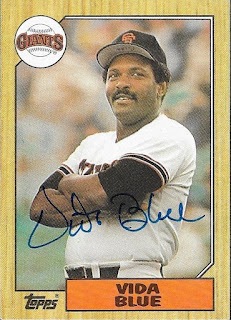 Also, in between the time Blue's cards were put into the TTM box and when I mailed them out, I had decided to try to get as many signed 1987 Topps as I could.  So, that made the decision really easy as to what the second card I would send would be.

Blue appeared on the Hall of Fame ballot only four times between 1992 and 1995 and only received at most, 8.7% of the vote.  A stronger look at Blue's candidacy should be taken, as he has very good career stats.  One would think that he would have had some higher vote totals.