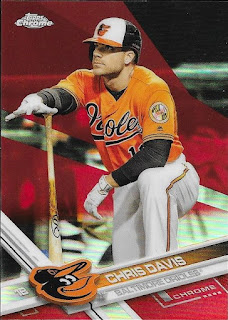 My "to be blogged" stack consists of a lot more than just TTM successes.  I figured it was a good time to try to knock it down a bit, so to speak.  If I really knocked the stack down, I'd be in trouble, since I would have a huge mess to straighten up.

I have toned down my PC pickups recently, and it is a direct correlation to how the Orioles, and also Chris Davis performed this season.  Davis is still my guy, but since he had a pretty crappy year, other things took precedent.

Of all of the Davis cards that I had picked up that hadn't been blogged, the above 2017 Topps Chrome red parallel may be my favorite.  It is numbered 3/5 and looks so awesome in person. 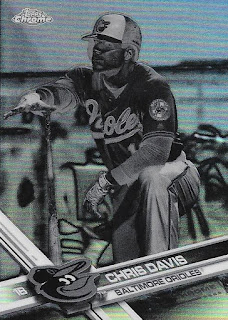 This reverse negative from 2017 Chrome looks really cool, too.  I like this concept and wonder if a photo editing program can reverse the reverse negative.  Has anyone tried it? 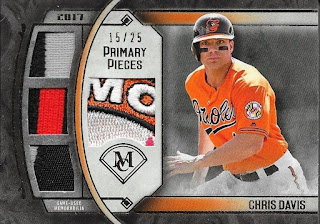 This 2017 Topps Museum Collection quad patch card is a very close second to the red chrome parallel.  I got this card pretty cheaply, which is one benefit to Davis having a down year. 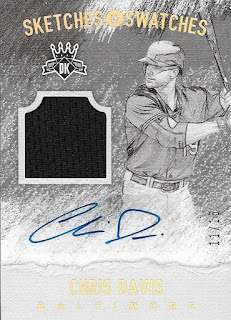 Finally, I picked up my third Chris Davis Sketches Swatches card from 2017 Diamond Kings.  I really like these, which is why I now have three of them.

I'll probably start adding to the PC again soon, maybe after Christmas, so keep a look out!
Posted by William Regenthal at 7:27 AM