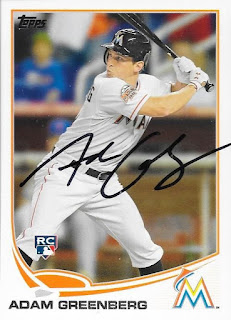 The biggest enjoyment I get out of sending off TTM requests and then blogging the successes is the ability to tell the story of the player who's autograph I have obtained.  Sometimes they are players with long and distinguished careers, and others could be guys who only had a cup of coffee at the Majors.  They all have a story, and the story of Adam Greenberg might be one of the more unique.

That is the template of which I use for writing about the subjects of my TTM successes.  Go back and read my TTM posts, and you will see that is pretty much how my entries are laid out.  Greenberg, however, warrants a little more than just a glance at his stats.  With the zeroes across the board, one would wonder what makes this guy stand out from any of the other guys I have sent out to.  Well, in 2005, while playing for the Cubs, Greenberg made his major league debut.  In his very first plate appearance, Greenberg was hit in the head with the very first pitch that he saw and suffered a compound skull fracture.

He was diagnosed with a mild concussion and said that just bending over to tie his shoes caused excruciating headaches for hours.  He would go on to play in the minors up until 2012, when Cubs fans started an online petition to get Greenberg his first official at bat in the Majors.  The Miami Marlins signed Greenberg to a one-day contract to play in their October 2 game at home against the Mets.  He entered the game as a pinch hitter in the 6th inning and walked to the plate to Aerosmith's "Dream On."  His salary for the day was $2,623 and was donated to an organization which researches brain trauma in athletes.  Greenberg struck out on three straight pitches from knuckleballer, R. A. Dickey.  Greenberg announced his retirement from baseball in February of 2014.