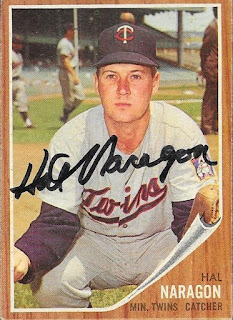 I went to a card show here in Greenville a few weeks ago and picked up some nice vintage cards to send TTM.  The first one to come back was this success from Hal Naragon.  I grabbed a few cards of his really cheaply at the show; mostly cards I didn't have many of in my album.

I really like 1962 Topps, and would like to build that set sometime soon.  I have way too many other sets in the works at the moment, or I would already have started this one. 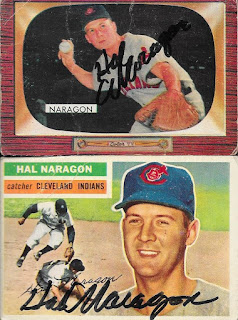 1955 Bowman is actually a set I could get started pretty quickly.  I already have Mickey Mantle and a few other Hall of Famers, so that one would be a good one to complete, as well.  I have picked up a good many from the 1955 Bowman set and have gotten them signed.  I haven't counted my Bowmans like I do my Topps, but I imagine I have at least 10 cards from 1955 Bowman signed. 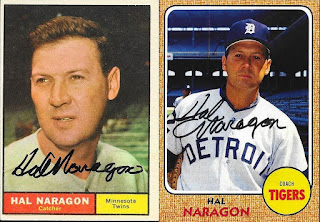 I remember a time when I only had 2 signed cards out of 1961 Topps (above left).  Now, I have 11.  Naragon also sent one of his own cards, a custom in the 1968 design (above right).  I like when players include their own stuff, but it is sure not expected. 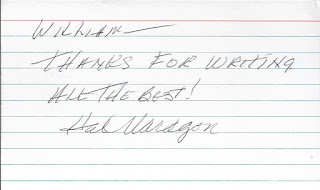 Finally, Naragon sent a nice note on an index card, and signed that as well.  He went above and beyond with this TTM request.  He seems like such a nice guy.

I mailed to Naragon on October 28 and got the cards back on November 6, for a 9-day TAT.
Posted by William Regenthal at 9:58 AM