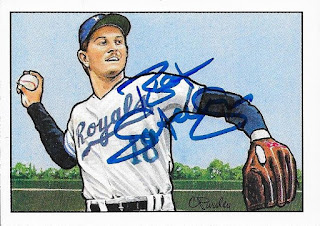 I had a chance to get an autograph from Bret Saberhagen a few years ago as part of the VIP free signing at the National in 2015, but I got in late and missed out.  Luckily, I learned that Saberhagen signs TTM for a small fee to the Make a Difference Foundation.

For $5/card, I got some nice cards signed.  The aboce 1990 Bowman promo card was a really good one to send off.  It turned out great, and I am glad I sent it. 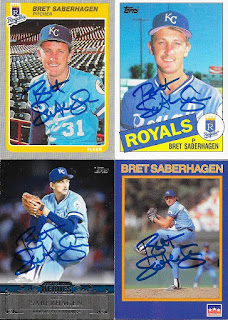 I also sent off two 1985 cards of Saberhagen (top left - Fleer amd top right Topps) that turned out great.  The card on the bottom right is a 1990 Starline Coca Cola.  I'm pretty sure I got it out of a repack box; that is the only explanation I can come up with as to where it came from.  The 2013 Topps Postseason Heroes card on the bottom left was a cool insert to add to my album. 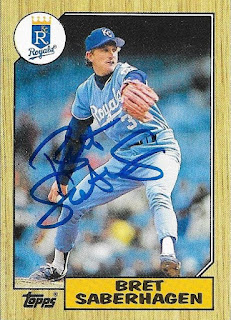 I mailed to Saberhagen on September 19 and got the cards back on October 28, for a 39-day TAT.  I paid his fee of $5/card with a check to the Make a Difference Foundation.
Posted by William Regenthal at 7:00 PM