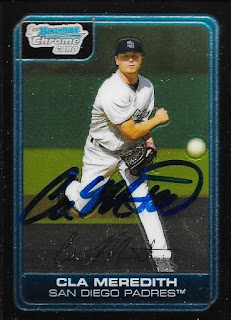 With all of the vintage cards coming in from TTM requests, it was kind of refreshing in a way to receive this return from former reliever, Cla Meredith.

The most exciting part of it, for me, was getting this 2006 Bowman Chrome back signed.  I had gotten a box of these a while ago, long before I knew about graphing and prospecting, and sat on the cards.  I now have a ton of 2006 Bowman Chrome cards of guys who never made it just sitting in a box.  So, when I found one of a guy I could send to, I was really happy. 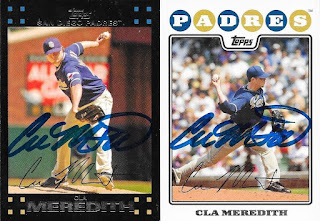 All of the cards turned out really nice, and Meredith has a nice signature.

I mailed to Meredith on August 5 and got the cards back on November 20, for a 107-day TAT.
Posted by William Regenthal at 9:16 PM