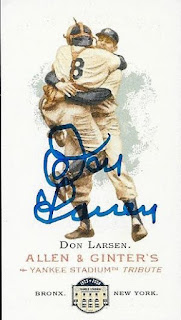 I added another really nice TTM success to my album with this success from Don Larsen.  I had two of the cards that I sent off and bought the other two off of Ebay.  The above Allen & Ginter mini was actually a National Card Show exclusive from 2008 that I got for a dollar off of EBay.  I was glad I found this, because I was really hoping I could find a card that showed the historic embrace of Larsen and Berra during the 1956 World Series perfect game. 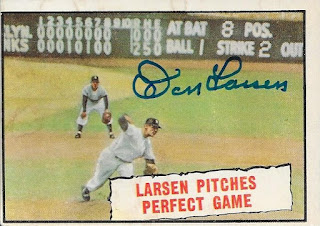 I also found this 1961 Topps on Ebay and sent it off.  It looks really nice, and I was happy to have found it as well. 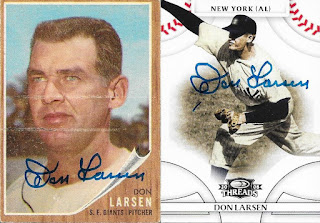 I was going to stop at the above 1962 Topps, but then I found the 2008 Donruss Threads, so I went ahead and sent that as well.