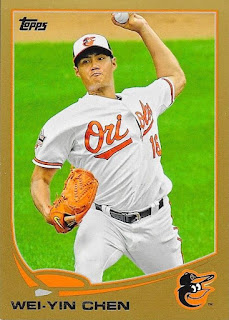 I just met Dayton over at Daytons Cards on Instagram a few months ago.  I found him some coaches for the minor league teams that he sees, and figured that would be all we interacted until the start of the season.  Dayton surprised me, though, with a Christmas care package that had a few autos in it, and the above 2013 Topps gold parallel of Wei-Yin Chen.  It has been a while since a Chen card appeared on the blog. 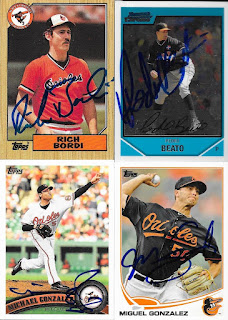 I liked the autos that Dayton sent along.  Even though I already had Rich Bordi in my album, I will put this one in there as well, since he gifted it to me.

I thought I already had the 2013 Miguel Gonzalez, but I guess I didn't, which was a nice surprise.  I also did a double take, because I thought the 2011 was Miguel, as well, but it was horrible Orioles relieved, Mike Gonzalez.  I shudder at the memories of him closing games.  Still, I needed the card, and I am happy to have it, no matter how bad Mike Gonzalez was.

Thank you so much for the care package, Dayton!
Posted by William Regenthal at 5:35 PM