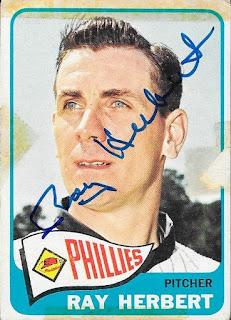 Yet another vintage guy came in recently, this time I got two cards signed by Ray Herbert.  The above 1965 Topps was a little rough, but it still looks nice when signed.  I think I got these cards from my LCS, instead of the Greenville card show, but I really don't remember. 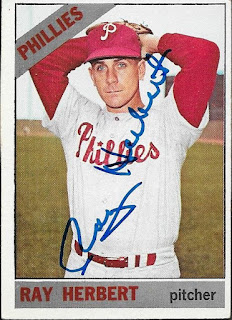 This 1966 Topps also turned out really nice.  1966 Topps is a pretty underrated design, not as good as 1965, but still a decent design nonetheless.

I mailed to Herbert on October 16 and got the cards back on November 24, for a 39-day TAT.
Posted by William Regenthal at 11:42 AM