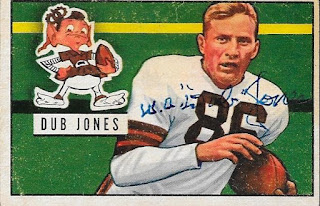 Here is the latest football player that I got TTM on some nice vintage cards.  I loved these cards of Dub Jones when I saw them, so I made sure to pick them up to try to get them signed.  The old Browns logo on the above 1951 Bowman looked really cool, too. 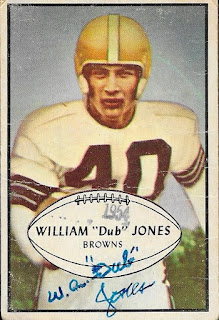 I also liked the old football helmet on the above 1954 Bowman.  Someone stamped 1954 on the card, but it doesn't really take anything away, at all.

He won the AAFC (All-American Football Conference) championship in 1948 and 1949, and the NFL championship in 1950, 1954 and 1955.  He was also a 2-time pro bowler.  He was the second pick in the 1946 NFL draft out of Tulane.  He originally attended LSU, but entered the Navy during World War II, and was transferred to Tulane by the Navy for a training program.

I mailed to Jones on November 7 and got the cards back on November 24, for a 17-day TAT.  By my count, I am waiting on one more return from the football players that I sent to.
Posted by William Regenthal at 6:12 PM