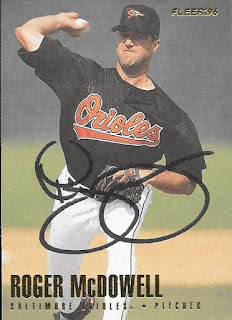 I got another TTM success in that was sent out earlier in the year.  I never write off TTM requests, no matter how far out they are, and I am glad this one came in.

I had only one of these 1996 Fleer Update McDowells that had him in an Orioles uniform.  I had hoped to get it signed at Orioles Fan Fest, but I missed out. 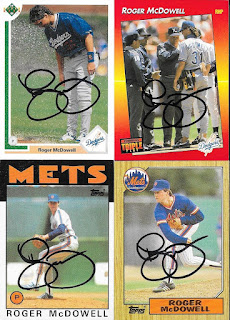 I also got these four cards signed, highlighted by the 1987 Topps on the bottom right.

I mailed to McDowell at Orioles Spring Training on February 20 and got the cards back on December 9, for a 296-day TAT.  McDowell will be starting his second season as Orioles pitching coach when the 2018 season starts.  Let's hope his pitching staff does a much better job then, because they were terrible in 2017.
Posted by William Regenthal at 5:55 PM