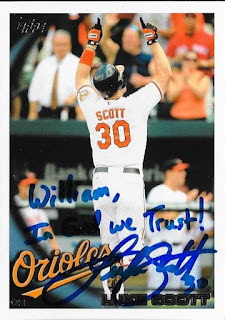 I got two TTMs in over the last week to close out my TTMs for 2017.  This one was a nice 2010 Topps signed by former Oriole, Luke Scott.  I sent him 4 cards, but only had one returned.  This one, though, might have been the best of the bunch.  I really like his pose in the card.

Scott (b. 1978) played in the majors from 2005 to 2013 for the Astros, Orioles and Rays.  He had 725 hits, 135 home runs and a .258 batting average.  I remember him as a beast when he played for the Orioles, but never could quite put it all together.  Still, he had a pretty good career, and is remembered fondly even though he was on some bad Orioles teams.