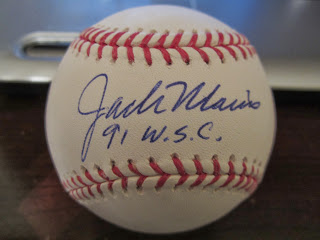 Much to my surprise, I was able to add a new baseball to my Hall of Fame signed baseball collection without spending a dime.  I thought the Veterans Committee vote was later in the week this week, but the results were actually announced tonight.  Alan Trammell and Jack Morris were announced as the newest electees to the National Baseball Hall of Fame.  I thought maybe one of them would get in, but both of them made the cut, anf Ted Simmons was really close.  I'm happy to see both of these guys make it, as they had been discussed for quite a long time, and it really didn't make sense that neither was in.

I haven't added very many Hall of Fame baseballs to the collection this year.  With the selection og Morris to the Hall, he becomes my 134th Hall of Famer in my collection.

I picked up this ball on Black Friday in 2013 as a purchase of Historic Autographs Ball of Fame II.  I loved that product and now the value has shot up a little bit for me!  You can read about the hit here.
Posted by William Regenthal at 7:25 PM