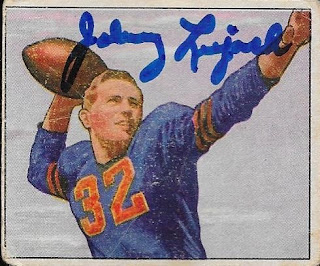 Here is the last former football player I was waiting on TTM.  I got a nice 1950 Bowman signed by former Chicago Bear, Johnny Lujack.  This card turned out great, I think.  It cost me a decent amount, but I'm glad I took the plunge on these football cards. 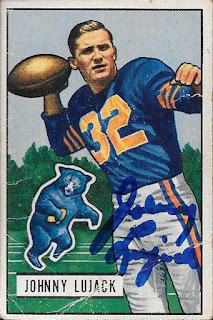 This 1951 Bowman also turned out really nicely.  I like the old Bears logo.

I mailed to Lujack on November 10 and got the cards back on December 9, for a 29-day TAT.
Posted by William Regenthal at 8:46 PM