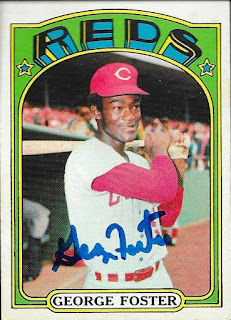 Max picked up another auto for me while he was at his show in Chicago, George Foster.  I paid for this one, which was $25.00, I think.  I also raided my 1972 Topps set for this card, but I was glad to get it signed.

Foster appeared on the Hall of Fame ballot four times, but was only able to receive as much as 6.9% of the vote.
Posted by William Regenthal at 5:24 PM