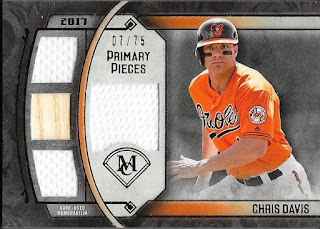 I got a Christmas gift in yesterday from my good friend, Gerard.  Normally, I would have waited a bit to blog it, since I have other Christmas stuff that I got before it, but I wanted to go ahead and get this Davis in a magnetic case, since I bought one too many the other day.  It worked out.

I really liked this 2017 Topps Museum Collection Chris Davis that Gerard sent.  He surprised me with it, as it was buried in the bottom of a box of random cards (and a parking pass, lol).  He sent back a good bit of the TTM starter pack that I had sent him, since he already had gotten most of those guys.  Like a stand-up guy, Gerard sent them back so I could send them to someone who could use them.  He's a great guy, like that.

Thank you so much for the Christmas gift, Gerard.  I really love the card!
Posted by William Regenthal at 12:08 PM