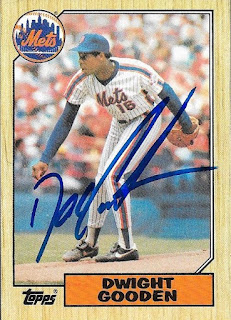 My good friend, Max, just went to a card show in Chicago and was nice enough to pick up something that I could add to my 1987 set.  I provided the card, and Max got it signed by Dwight Gooden.  I had to choose between Gooden's base card or the All Star card from the set.  I figured I should go ahead and get the base one done, so that was what Max did.

Gooden was on track for a sure Hall of Fame career, but drug use derailed his career in his prime.  As a result, he appeared on only one Hall of Fame ballot, 2006, but received only 3.3% of the vote.  He is sure to get some more consideration via the Veterans Committee, but I sincerely doubt he will ever make it into the Hall.

Max also picked up another auto for me at the show that I will discuss in my next post, to stay tuned!

Thank you so much for the pickup, Max!!
Posted by William Regenthal at 7:03 PM