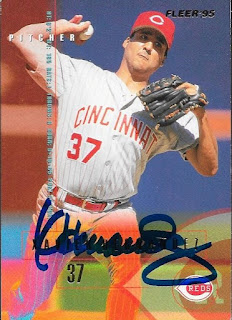 This was a nice change in TTM pace with this success from Xavier Hernandez.  I definitely don't mind getting 1987s in, but I got some cool 1990s cards in with this success.  The above 1995 Fleer was a really cool card to get signed.  Again, like I have said so many times, this is such a freaky set.  It's like the printing machine went nuts and Fleer just stuck with whatever came out.  I love the card, though, and it was an easy pick to send along. 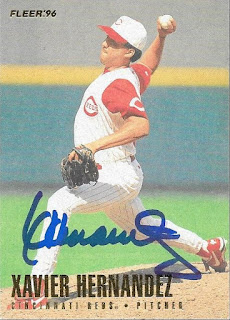 As nuts as 1995 Fleer is, 1996 Fleer is basic and straightforward.  The matte finish lends to a nice auto, so I had to send this one along as well. 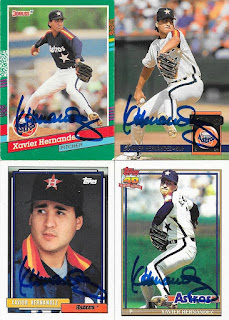 In the end, I sent two Fleer, two Donruss and two Topps to get signed.  They all look great, I think.  I'm glad I tossed the 1991 Donruss in, as I had a ton of them when I was growing up, and not enough represented in my album.

I mailed to Hernandez on September 28 and got the cards back on October 23, for a 25-day TAT.
Posted by William Regenthal at 5:37 PM