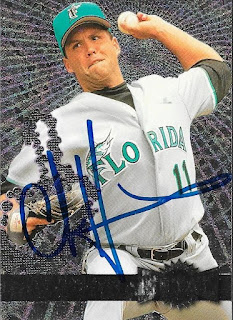 Here is another player who's cards I sat on for a long time before I finally mailed to him.  The reason why I waited so long to send these cards to Chris Hammond was because he charged for his autograph, and I didn't want to spend the money.  In an effort to clean up my box, I went ahead and mailed to some of those guys who charged.  I was really happy with the cards that I chose.  The 1996 Fleer Metal shown above turned out really nicely.  Hammond charges $1.00/card to a scholarship fund, so I had no problem sending him some money, once I got around to it. 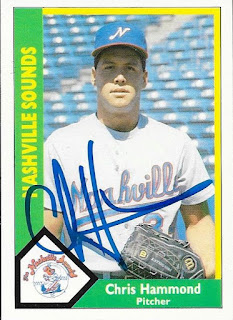 I was able to get another card signed out of the attic box that Mom sent me.  These cards aren't anything glorious, but they do help when you need cards of someone who was in the minors at that time. 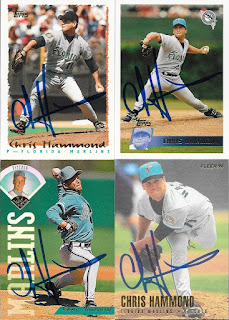 Finally, here are the other cards that I got back from Hammond.  The highlight, of course, is the 1996 Topps at top right.  I have very few cards from this set, let alone of any guys who sign, so I definitely needed to make sure that one was in my TTM request to Hammond.

I mailed to Hammond on October 4 and got the cards back on October 16, for a 12-day TAT.
Posted by William Regenthal at 7:00 PM