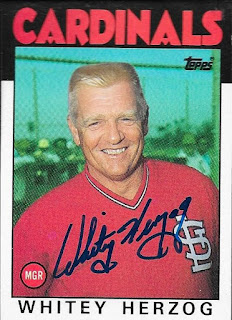 In my quest to add more signed cards to my 1987 set, I spent a little money to add some bigger names.  One of those was Hall of Fame manager, Whitey Herzog.  He charged $5/card, which I gladly sent along.  I went ahead and sent the above 1986 Topps so I could add another card to my album. 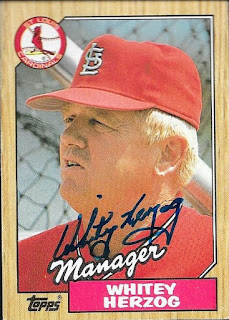 Here is the 1987 that I sent, and it turned out really nice.

He was elected to the Hall of Fame in 2010 by the Veterans Committee.

I mailed to Herzog on September 25 and got the cards back on October 2, for a 7-day TAT.
Posted by William Regenthal at 5:52 PM