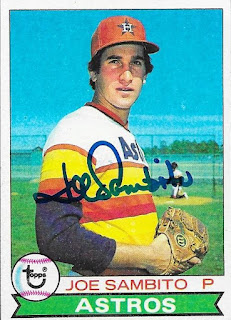 Here is a TTM success that shows off one of the most outrageous uniforms of all time, the 1970s Astros uniform.  This 1979 Topps of Joe Sambito really shows off the colorful Astros jersey.  You would think their hats would be equally as outrageous (something like the Pirates pillbox caps of that era come to mind), but their hats are pretty low key compared to the jerseys. 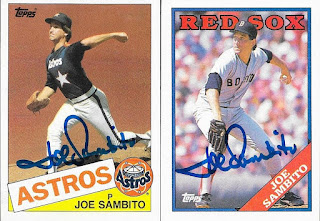 These later 80s cards show Sambito in less flashy uniforms.  Still, they are nice cards, and Sambito has a really nice signature.

I mailed to Sambito on September 28 and got the cards back on October 6, for an 8-day TAT.
Posted by William Regenthal at 8:28 PM