Birthday Gift and Some Autos From Nick H. 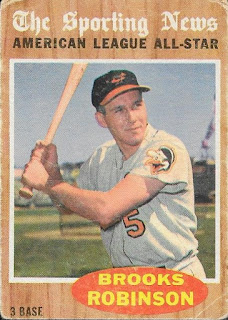 My buddy, Nick H. has been doing some 50/50s for me this season, and has been talking with me for a couple years now.  He's a really great guy, who graphs the Columbus Clippers.  He surprised me with a nice little package for my birthday, which had a nice assortment of Orioles.

I didn't have this 1962 Topps Brooks Robinson All Star card, to my recollection.  It has seen a lot of love over the years, but will now be retired to a top loader and a home in my Brooks box. 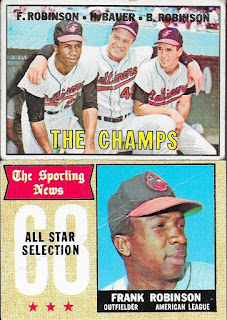 I did have the above 1967 Topps Orioles champions card, but I took it and added it to my 1967 set.  I'm pretty sure I didn't have the 1968 Topps Frank Robinson All Star card. 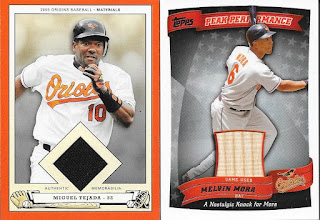 These two Orioles relics were really nice.  I believe Nick had just recently went to a card show, which means that he was thinking of me while he was there, which is always a nice feeling. 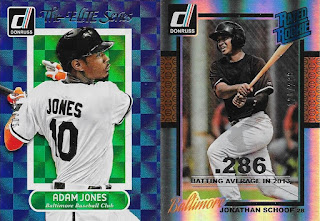 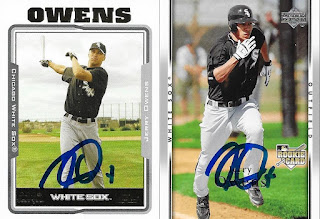 Nick has been getting me autos all season of Columbus players, as well as other guys who have come by.  These were the last of the cards that he was due to send me.  Jerry Owens is a coach for Columbus, and Nick has gotten his auto for me on some nice cards. 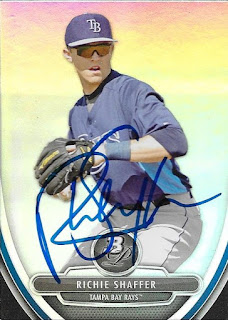 Finally, here is a Richie Shaffer that I had sent Nick a while back.  He was finally able to get it signed before the season ended.

Thank you so much for the birthday package, Nick.  I feel bad that it took me this long to get it posted, but I am slowly catching up on my stacks.
Posted by William Regenthal at 6:52 PM