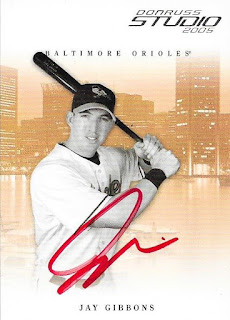 I have had a bunch of exciting TTM successes come in recently.  One that I may have been the most excited about is this return from former Oriole, Jay Gibbons.

I had a multitude of Gibby's cards to choose from, and the above 2005 Studio was a card I wanted to get into my album for a long time.  I'm glad Gibbons was the first out of that set that I was able to add.  I love the background of the card, a shot of the Baltimore skyline as seen from the Inner Harbor. 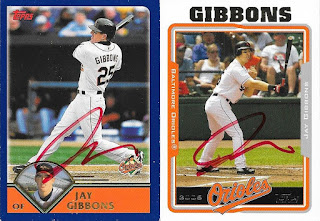 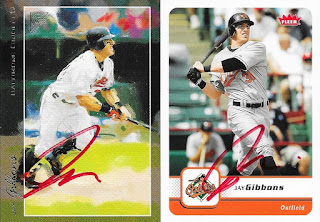 Finally, I decided to add two other different sets to the album in 2005 Gallery (left) and 2006 Fleer (right).

Gibbons (b. 1977) played in the majors from 2001 to 2007 and 2011 to 2012 for the Orioles and Dodgers.  He had 759 hits, 127 home runs and a .260 batting average.  He was obtained by the Orioles when picked during the 2000 Rule V Draft.  He was a member of the O's during the "dark ages" of the organization, when they were right in the middle of a 14-year losing streak.  I remember him fondly.   He was also shown on a TV in the movie, "Wedding Crashers" hitting a home run (when Owen Wilson's character is depressed and avoiding Vince Vaughn).  Gibbons is now a coach in the Dodgers system.

I mailed to Gibbons on May 10 via the Rancho Cucamonga Quakes and got the cards back on October 20, for a 163-day TAT.
Posted by William Regenthal at 6:08 PM