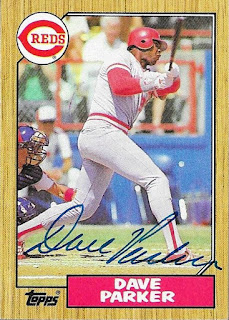 I had gotten Dave Parker TTM way back in 2010 or 2011 on a ball.  Recently, I decided I would try to get as many 1987 Topps as I could, so I figured I would send these two cards off and try him again.  Since Parker has Parkinson's Disease, I wanted to get these out while he was still signing.  Rumor has it, he won't be signing for much longer. 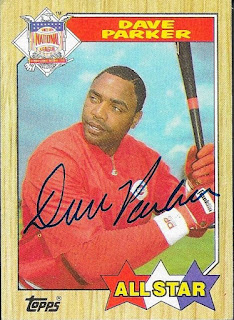 For some crazy reason, Dave Parker is not in the Hall of Fame.  Jim Rice is in with similar awards and similar stats.  Parker lasted 15 years on the ballot, the then maximum that anyone could remain on the ballot.  He only received at most 24.5% of the vote.  His last chance was in 2011, and he only received 15.3% of the vote that year, well short of the required 75%.  Now, Parker's only chance at the Hall is via the Veterans committee.  He will be eligible this December for the Veterans Committee vote, but with other popular players such as Alan Trammell, Jack Morris and Lou Whitaker on that ballot, it doesn't look like Parker will make it this time, either.