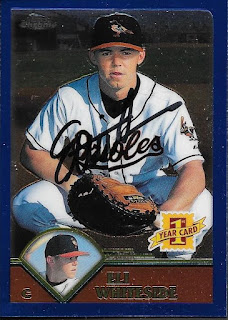 I always enjoy obtaining an autograph of a former Oriole, no matter how obscure the player.  I had a couple Eli Whiteside cards in my box, so I figured I would take a shot at sending to him via the Giants this season.  Luckily, I got two of the three cards back that I sent, and they turned out really nicely.  I love the above 2003 Topps Chrome.  This is a really pretty set, and the card looks great in person. 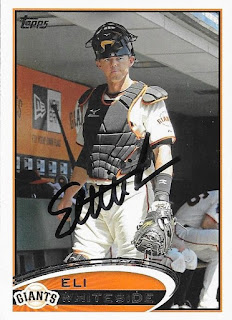 I had two of these 2012 Topps of Whiteside, so I went ahead and sent them both.  He kept one of the cards, which is fine.

I mailed to Whiteside via the Giants Spring Training on February 23 and got the cards back on October 5, for a 224-day TAT.
Posted by William Regenthal at 6:04 PM