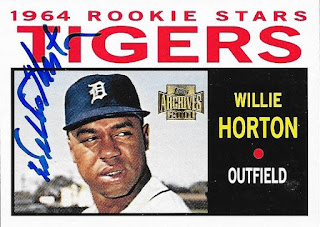 I made a concerted effort recently to clean up my TTM box.  I spent several days organizing it, and alphabetizing it.  Another thing I wanted to do to help manage the box, was to finally take the plunge and send off to some more of the players who charge for their autos.  I had a separate section in my box devoted to such players, and many of them have been sitting in there for over a year.

Finally, I got around to sending to a few of them.  One of the players I had been waiting to send to for a long time was Willie Horton.  I kept putting it off, and decided that when I was going to pay the money, he would be one of the first I wou;d sent to. 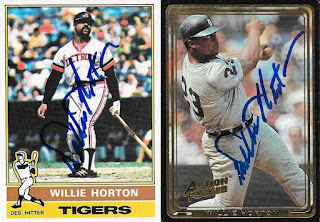 I had some really nice cards of Horton to send.  The 1992 Action Packed (right) was one I really wanted to add to the album.  I have since added a Boog Powell to the album, so this isn't the first, but I meant for it to be!  I also got this nice 1976 Topps card done.  I had a few of Horton's Topps cards available, but I thought that the 1976 would look the best out of what I was going to send.