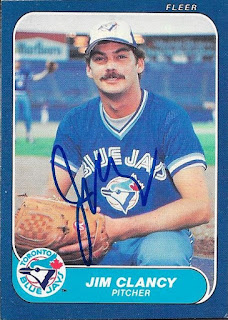 Here are some more signed cards from the 1980s that I was able to add to my album with this TTM success from Jim Clancy.  I especially liked this 1986 Fleer that I got signed.  There is a whole lot of blue on this card, now that I am paying some more attention to it.  Still, it looks nice. 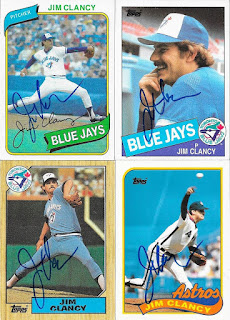 I added some nice Topps cards, including another 1987 Topps for the album.  As of today, I am sitting on 99 signed cards from that set.  Not too bad.  The 1989 Topps Traded (bottom right) turned out really nice, as well.

I mailed to Clancy on September 20 and got the cards back on October 17, for a 27-day TAT.
Posted by William Regenthal at 9:48 PM