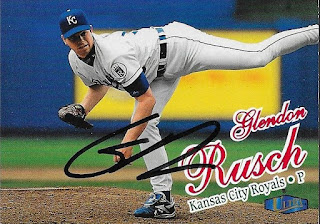 This was a TTM success that added a few late 90s cards to the album that I mostly came across in some old boxes at my LCS.  I like these 1998 Fleer Ultras.  They lend themselves to great autos since they have no borders and are fairly glossy.  This shot of Rusch was a good one, and it looks great signed. 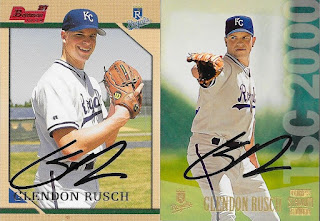 I picked up a box of 1996 Bowman while handing with Andrew, so I wanted to add a few of these to my album.  I like the coloring on the border, almost a beige to pink color like 1968 Topps (without the burlap).  The 1997 Stadium Club TSC 2000 is really cool, a type of card that I hadn't seen before.

I mailed to Rusch on September 2 and got the cards back on October 16, for a 44-day TAT.
Posted by William Regenthal at 11:28 AM