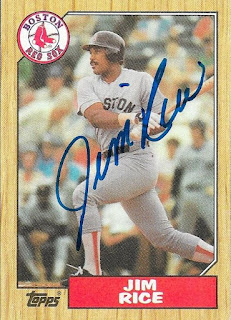 I decided to push a little bit harder with the 1987 set, mostly because I have two boxes of them, and need to find something to do with all of these extra cards.  I spent the money on finally adding Jim Rice to my list of TTM successes. 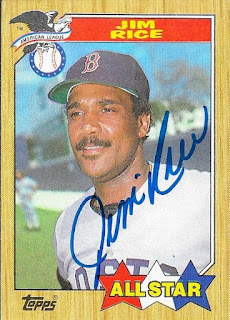 I already have Rice's autograph on a ball for my HOF collection, but I figured at $10/card, it wasn't a bad idea to add him to my autograph album as well.  Also, I will forever remember searching the two boxes with my son Chris for just one card, the above All Star version.  We finally found this one in the last row of the second box.  Full disclosure, though, I went into my boxes a couple weeks later and found one almost immediately.

I mailed to Rice on September 16 and got the cards back on September 25, for a 9-day TAT.  He charges a fee of $10/card, and will only accept cash.
Posted by William Regenthal at 5:47 PM