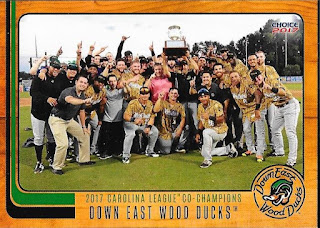 I said all season long that they should, especially since this was their first season.  What better way to cap it all off than to issue a set commemorating the championship season?

I love the design, a take on the 1982 Topps design, but with a wood bordered background.  I enjoyed thumbing through the set and seeing the familiar faces from this season.  I'm sure that many of them won't be back, but I'll still find a way to get them signed.

I bought 4 sets initially, one for me to work on getting signed next season, one to put in an album to keep a running series of Wood Ducks sets, and two so that Chris could do the same.

I hope they come out with sets every year.  I like the idea of keeping up with an album of each season.  I may also expand it to include Wood Ducks featured in Minor League Heritage and Pro Debut.  I only have two cards to add, then, with Yanio Perez showing up in Heritage, and the Wood Ducks mascot, Dewd, showing up on the disc inserts.
Posted by William Regenthal at 7:22 AM