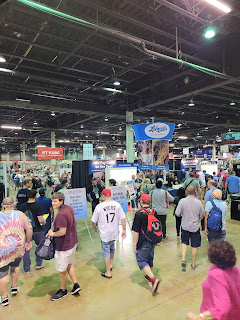 Another National Sports Collectors Convention is in the books, and while it got off to a rocky start (sort of), it was a really great National.  The card collecting hobby is booming, for better or worse, and that caused the crowds and prices to soar to ridiculous levels, in my opinion.  Still, by the end of the show, I had come away with some really great stuff, and actually brought a little bit of money home with me. 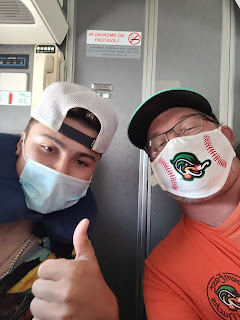 The trip started great; I was flagged down as I was getting onto the plane in Greenville by none other than Down East Wood Ducks catcher, Cody Freeman.  He recognized me, and chose to change his seat so he could sit with me on the flight from Greenville to Charlotte.  Antonio Cabello was also on the flight, which was really cool.  I enjoyed sitting with Cody and chatting with him for a bit. 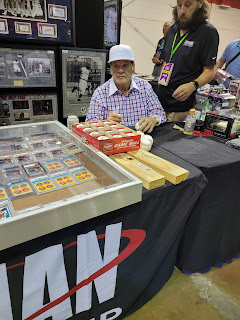 I also ran into this guy who was signing some baseballs for someone at the end of one of the days at the show (I think it was Thursday).  I spoke with Pete Rose for a bit about when we met him at the Hall of Fame, and thanked him for being so nice to my son, Chris. 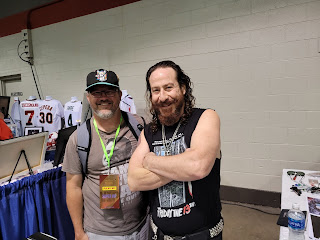 I also met Ari Lehman, the actor who played Jason (the first actor to play Jason) in Friday the 13th.  He was really nice, and I talked with him for about 15 to 20 minutes while he signed autographs.  He was one of two non-sports signers at the show (the other was Scott Schwartz from A Christmas Story).  There was also a HorrorCon happening the same weekend as the show, and I was able to attend that Friday evening and get a few autographs there, as well.  More on that in a later post. 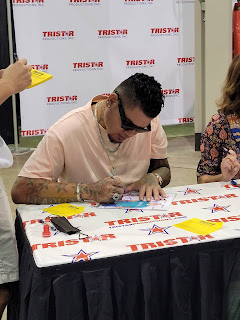 I had several paid vouchers for signers, and met all of the free baseball players.  I walked through the Felix Hernandez line with my friend, Michael, and met King Felix.  The biggest paid signer I had was David Ortiz, but he had a death in the family, and couldn't attend.  Tristar refunded me my money, which will be put toward the hotel costs that I have left over. 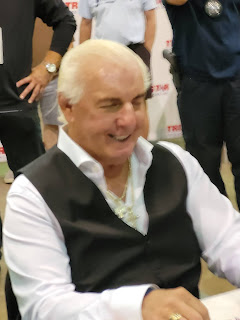 I paid to meet Ric Flair, since I had the dual card of him and Arn Anderson that I could finish up.  Flair was super cool, as always and maybe was the best dressed of all the signers there. 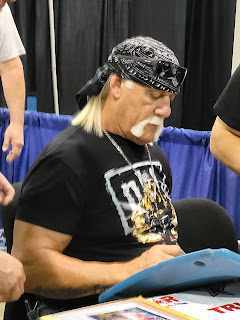 While I was in line to meet Flair, I got this nice shot of the legend, Hulk Hogan, who always draws a crowd at the National.  I didn't pay to meet him this time, but it was nice getting close to him, still. 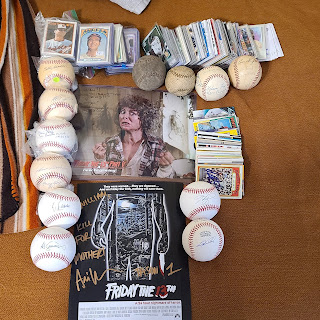 In all, I added 7 Hall of Famers to my collection.  I'll break those down in separate posts.  I also added, I think, 10 signed cards to my 1987 Topps set, including finishing a team leaders card.  I also got two antique baseballs (and got two more, which were part of the Hall of Fame autographs I referenced earlier).  Several cards were knocked off of my 1972 set, and one card was crossed off of my 1955 Bowman set.

I'll break a lot of this down in subsequent posts, but as can be seen in the photo above, I left there with a decent haul.

My biggest complaints regarding the National were that it was way too crowded, and there was a lot of redundancy.  You could tell who the "noobs" were; and most of them spent their allowance/budget within the first two days, leaving Saturday and Sunday a lot less crowded than in the past.

The redundancy was evident in that maybe 40% of the tables were the exact same stuff: a ton of graded [stuff] that I wouldn't buy, nor could afford; Yankees stuff and/or the usual suspects of "big names".  Of course, the big names are Ohtani, Ronald Acuna, Juan Soto and Wander Franco.  After the first two rows of tables, Andrew and I looked at each other and said that we had seen enough Acuna cards to last us a lifetime.  I can also complain that it was really hard to find dime boxes (actual dime boxes, not just boxes of 80s-90s junk disguised as dime boxes) and I couldn't find many folks who had Bowman parallels for graphing that I could look through.  Oh, and I really wanted to find some Perfect Game lots, Leaf Valiant or Elite Extra Edition cards of Cody Freeman, but found none, just big name guys like... Acuna, Soto and Wander.

In all, though, I had a great time in Chicago this year.  I spent a lot of time with my good friend, Andrew, and also my buddy Nate.  I spent time with Nate's friend, Kyle, as well, and also Michael.  I got to see my awesome friend, Max, for a short bit, too, but not nearly as much as I would have liked to.  I would say that this was a very successful National, even though the first few days were over-crowded.  I look forward to next year, in Atlantic City, which, if I'm able, I'll be there.

Wow. You got a chance to see a lot of big names. Sad to hear about Ortiz's family member though.