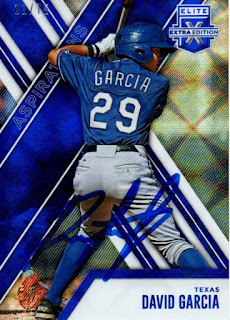 A last minute trip t Hickory yesterday yielded a few autographs to put into my binder after I did a little pregame graphing with Chris.  We had gone to one of my dad's races in Mooresville, and I figured I would try to get a few cards from the Wood Ducks team set taken care of while I was in the general area.  Unfortunately, most of the former Wood Ducks I needed were pitchers, and I learned that it is really hard to get pitchers to sign in Hickory with their COVID restrictions.  You can hardly get near any of them if they hang in the bullpen area.
Still, we came away with a few signed cards, even though we left in the third inning so we could get home at a decent time.  I was really glad to get the above 2017 Panini Elite Extra Edition David Garcia signed.  I got this card when the 2017 Elite Extra Edition came out, and kept the card with my Rangers stuff, waiting for him to come to the Wood Ducks.  He never did, but thankfully, I noticed him on the Crawdads roster, and remembered exactly where I had the card.  It looks great, and it is one less card hanging out in my box, now. 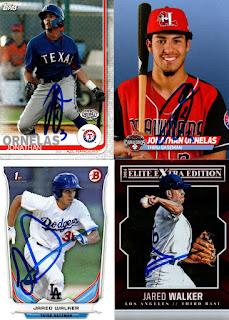 I knocked out a couple Jonathan Ornelas cards; he signed 2 per for both Chris and I.  I also took a 50.50 from Gerard, and got a could Jared Walkers knocked out for him.  The 2014 Bowman was mine to begin with, and he provided a blue wave chrome version of that same card, and two of the 2014 Elite Extra Editions. 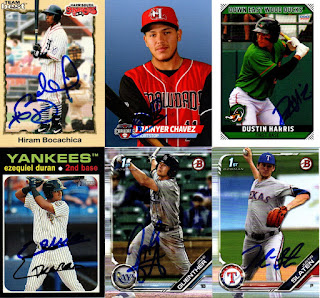 I dug deep in my boxes and came up with the 1998 Team Best Hiram Bocachica, which was a cool find.  He was really nice, and spoke with me and a nice lady who was beside me, a Crawdads season ticket holder who helped me identify the players as they walked by.  She saved me a ton of time from having to look at the roster and match up numbers.

I was able to get one former Wood Duck, Dustin Harris, which was nice, because he is tearing up High A pitching at the moment.  It was also nice to hit a couple 2019 Bowman draft, and also the 2020 Topps Heritage Minors Ezequiel Duran.

The season is winding down, and I doubt I'll be able to do many more away games at other stadiums, but I'm going to try.  I know I've knocked out more cards that I thought I would this season, and there's still 3 or 4 weeks to go.

Posted by William Regenthal at 10:31 PM