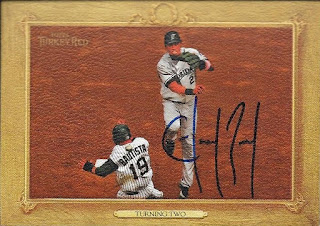 When I saw a private signing pop up for Hanley Ramirez, I got really excited for some reason.  He was never one of my favored players, but I did know that I had some nice cards of his that I would like to get signed.  So, I joined the signing with the intention of getting a card done, and ended up sending two.  I also sent one for my good friend, Gerard. 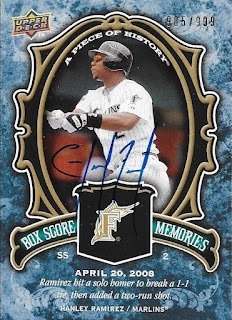 Both of the cards I sent turned out nicely.  The 2007 Turkey Red (top) may be completed someday with Jose Bautista, but for now, it is in my album.  The above 2008 Piece of History blue parallel was a nice find in my box and also looks great in my album.

Posted by William Regenthal at 9:18 AM