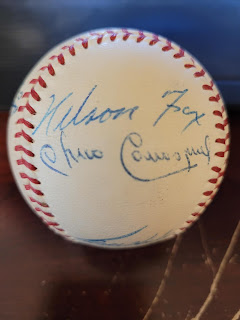 The budget for me for this year's National was fairly substantial.  I had been saving up for two years, pretty much.  So, I found a couple of multi-signed baseballs that would knock off a few names from the Hall of Fame list; and a lot of the names I crossed off turned out to be some pretty tough ones at that.

The first of the two multi-signed baseballs was this 1955 All Star Game signed ball.  It has several Hall of Famers on it, but the awesome, clear signature of Nellie Fox was what drew me to it.  I saw the ball on the first full day of the show (Thursday), but I didn't pull the trigger until Sunday.  As always, Sunday is deal day, and I got the ball for $100 cheaper than what it was listed at.  I feel like I got a steal.  The ball has a full letter of authenticity from JSA, and the other Hall of Famers on it should have pushed it higher (especially one that is very faint, but is noticeable, still - more on that later on).

Still, Fox was the selling point for me, and I was glad to add the ball to my collection at the price I paid.

Fox was elected to the Hall of Fame in 1997 via the Veterans Committee, after just missing the cut on the 1985 Writers ballot with 74.7%.  Fox becomes my 154th Hall of Famer on a baseball.

Posted by William Regenthal at 1:41 PM

I know what I paid for the multi signed ball I bought you a few years ago.those things aren't cheap. I'm glad you got to cross some HOF names off of your list.