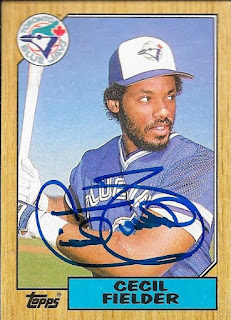 One of the free VIP party signers was a pretty big name, Cecil Fielder.  I needed Fielder for my 1987 set, so I was really excited to try to finally get that off of the list.  I had joined a private signing maybe 3 years ago, or so, and never got the card back.  So, here the card is, and it is off of my list. 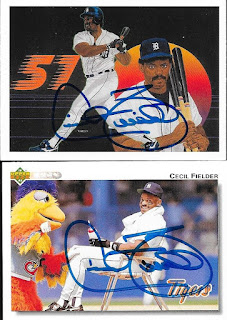 Fielder would only sign one per, so my friend, Nate, got the above 1991 Upper Deck Fielder's Feat card signed for me.  Andrew got the 1992 Upper Deck done. 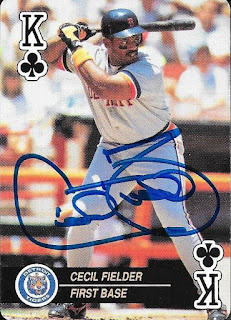 I went back through the line and got this playing card done.  My mom had given mea bag of cards she found at Goodwill, and there were two incomplete sets of these cards in the bag.  I haven't gotten any of them signed, so adding this Fielder to my album was something nice to get done.

Posted by William Regenthal at 4:28 PM