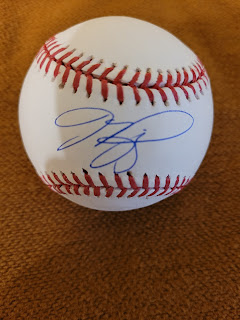 The signers list this year at the National was kind of light.  I think it was because they weren't sure about the event even happening until June 1, then Tristar had to scramble to get guys lined up.  Even past free signers like Marty Cordova were on the paid list this year.  Still, there were a few guys I needed for my Hall of Fame collection.  Speaking of, the collection has been neglected lately with the signed 1987 Topps set taking up a lot of my time.  I picked a couple guys off of the list who I still needed; and I missed one that I thought I had (Larry Walker).

I paid the fee to meet Mike Piazza, and got him on this baseball Saturday at the show.  He was really cool; we talked about him getting in trouble with Axl Rose years ago when Piazza leaked some new GNR music to an LA radio station.  I had asked Piazza if he had any new ones he could leak for me, since I'm a huge fan, and he said "Man, I got into so much trouble over that..."  I said "With who, Axl?  Did you make him angry?" and Mike replied "Well, when is he not angry?"  That was a cool shared moment right there, albeit brief, since we were moving through the line quickly.

Piazza was elected to the Hall of Fame in 2016, his 4th time on the ballot.  He is my 152nd Hall of Famer on a baseball, and the first that I have added since October of 2020.  Glad to cross a new name off of the list.

Posted by William Regenthal at 11:56 AM