Interruption From The 2021 National - Meeting Carol Locatell at Flashback Weekend 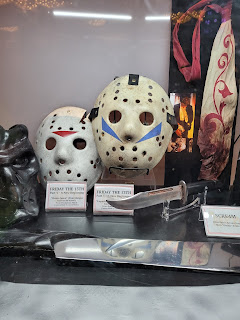 You may be wondering, who is Carol Locatell?  She is the actress who played the outrageous hillbilly woman, Ethel Hubbard, in Friday the 13th Part V - A New Beginning.  I grew up with the Friday the 13th movies, and for the longest time, Ethel was my least favorite character in the entire Friday the 13th series.  As time went on, and after viewing her interviews in the documentary, Crystal Lake Memories, I came to look at that character in a new light.  She is now my favorite character in the series, and I told all of this to Ms. Locatell when I met her on Friday at Flashback Weekend in Chicago.
Flashback Weekend was a horror con that happened to be going on at the same time as the National, across the street at the Hyatt Regency hotel.  I had heard about it when I happened to see an Instagram post from Jenette Goldstein (Yes, Vasquez from Aliens) about the Con.  Jenette posted that Mark Rolston (Drake, from Aliens) was going to be there, so my interest was piqued.  When I saw that Carol Locatell would be there, I bought Friday passes for Andrew and I.
The event was so much more low-key than the National.  Much less of a crowd, and a very small area where stuff was being sold.  Andrew and I saw the entire thing in the span of an hour, including the several conversations we had with the actors we met. 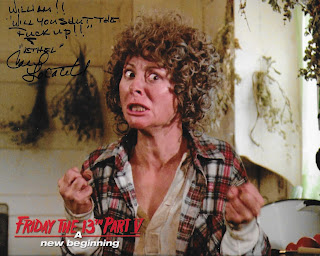 Ms. Locatell was the first person I saw there; she was still setting up her booth when I walked up.  Not ready to sign autographs, we chatted for a bit about my thoughts on her character, and how when I saw she was going to be there, I bought my tickets.  She told me it made her day, which was really cool.  I had asked her to please inscribe the photo I bought with her famous line from the movie, to which she happily obliged.  I was afraid she wouldn't do it.  She laughed and was more than happy to write it out. 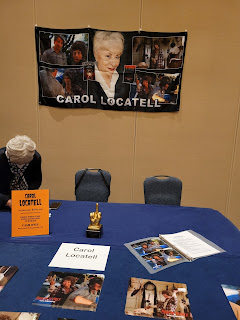 She's a really funny lady, and was super sweet.  I was genuinely nervous meeting her.  I really enjoy these interactions with folks that I grew up watching, because my brothers and I spent a great deal of time on Friday and Saturday nights watching scary movies. 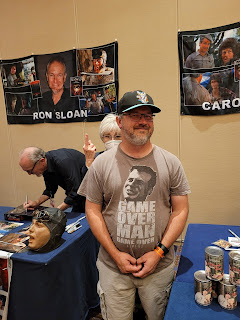 She even "photo bombed" me from behind when we posed for the photo op.  She had to wear a mask, due to COVID restrictions, so we couldn't get too close, but she told me she would have hugged me if she could.  I settled for a pat/scratch on the back, and this photo bomb of her flipping the camera off.  This is a mock-up of her riding away on a motor bike with her "son" in the movie.

Friday the 13th Part V gets a bad rap from most fans of the series, mainly because Jason isn't technically in the movie.  Who cares about that?  It actually is pretty entertaining; maybe a 4-6 beer movie, but if you were looking for a classic version of an 80s slasher movie, this one would pretty much be the definition.  There are tons of kills, off the wall characters, some 80s sleaze, stuff like that.  If horror movies aren't for you, I get it, but I grew up on 80s cheese, as I like to call it, and that stuff can make for an entertaining night, if you want something to do while having a beer or two.

I'm so happy I paid the $40 entry fee to meet Ms. Locatell.  Her autograph price was also $40, and well worth it, in my opinion.  I just wish I could have talked to her longer!

I'm surprised your parents let you watch that stuff 😁