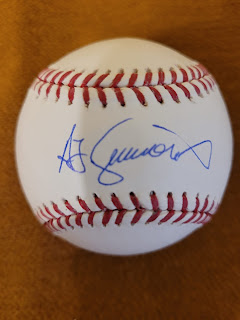 Another of the signers I paid to see was newly minted Hall of Famer, Ted Simmons.  I had already gotten on my 1987 Topps, but I needed him on a baseball for the Hall of Fame collection.  My 153rd Hall of Famer, Simmons was really nice.  I wish there wasn't an additional fee for him to put HOF on the ball, but Tristar likes their money.

Posted by William Regenthal at 2:17 PM

I was really happy that Simmons finally got the call from Cooperstown. It's nice to hear he's out there signing at shows. He doesn't have many "pack inserted" autographed cards out there.