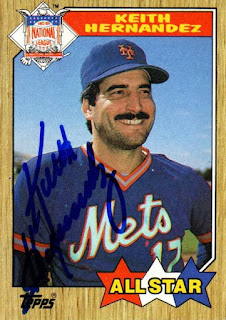 Six cards were crossed off of my 1987 Topps checklist when I found a few cards at different tables.  A few of them were purchased from the Signatures For Soldiers booth, which has the proceeds go to a good cause; helping veterans and wounded soldiers.
I had someone set to get me this Keith Hernandez card signed, but COVID messed that up.  I went ahead and bought this one, since it helped out a good cause, and it got the card out of the way.

I joined a private signing for Mitch Williams the same time I joined one for Charlie Leibrandt, and I have to say, I will never use that promoter again.  They have stopped answering my emails, and my cards never came back.  I'm out the $25 or so that I sent in for that signing.  They say that they sent me my cards, but that was supposedly over a year ago.  They would have gotten here by now.
I had sent to Mike Krulow TTM, and if that card comes in, I will upgrade this one.
Someone had told me they had the Mike Boddicker for me, but I haven't seen that, either, and I'm not about to pester someone to get it, so if that one comes in, it will be an upgrade, as well. 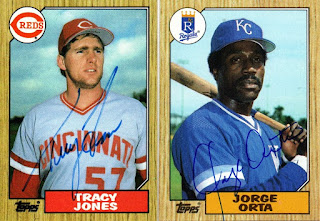 Finally, I added Tracy Jones and Jorge Orta, and both cards look pretty decent.  Both are signed in thin marker, so if the TTMs I sent out ever come back, maybe those signatures will be better.

These 6 cards put me well within 100 remaining for the set (actually, I need 97 more to complete the set.  They are going to be fewer and farther in between, unfortunately.  I think I can get close, but there are still several that I don't think I have a chance of completing.

Posted by William Regenthal at 9:07 PM