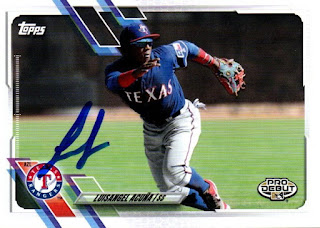 This series between the Woodpeckers and Wood Ducks was the first one I caught all games of in quite some time.  The season is winding down, and the Wood Ducks are in the middle of the playoff picture, so I wanted to catch as many games as I could.  There were only 2 guys on Fayetteville with cards, so I didn't have a whole lot to prep for this trip.  Add in the fact that I didn't have many guys on the Wood Ducks that I needed, I ended up going for a couple days and not graphing at all, which was kind of weird.  On Saturday, though, my boxes of Pro Debut came in, and I had a few more cards stocked up in my autograph book.  I was able to finally get a certified card of Luisangel Acuna signed; something other than a custom or a team set, which was really nice.

My dude, Cody Freeman, was back in action, so I was able to get my team set card done, as well as a couple customs my friend Dugan made for me.  Cody liked them so much, he requested that Dugan make him some. 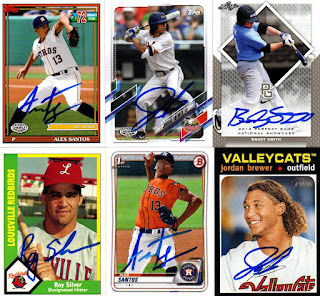 I got my Alex Santos and Jordan Brewer cards signed; the only Fayetteville guys who's cards I could find.  I also had a lot of 10 cards of Brady Smith come in, and found a few cards of roving instructor, Roy Silver.  I was excited when I saw that I had Silver's cards in my 1990 ProCards AAA box. 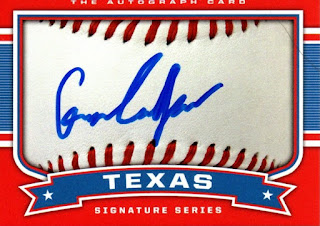 My friend, Ben, came for the Saturday game; his first game all season.  We graphed together a bunch in the past, and he has been missed this year.  He gave me some blank Rangers signature cards, so I got Gavin Collyer on one of them.  Gavin talked to Chris and I bunch this series, and has become one of our favorite guys on the team.

On Saturday night, Jayce Easley stole his 60th base of the season, which leads all of professional baseball.  I called it pregame, and Jayce was more than happy to sign and inscribe my ticket stub from last night.

We had a really good time this series.  The Wood Ducks won the series 4-3 (they finished a suspended game on Tuesday, followed by their regularly scheduled game) and as of last night, were tied with the Mudcats for the second playoff spot.  I'm hoping to catch all of the remaining home games as the Woodies continue to fight to keep the season going past that last series in September.

Posted by William Regenthal at 9:40 PM