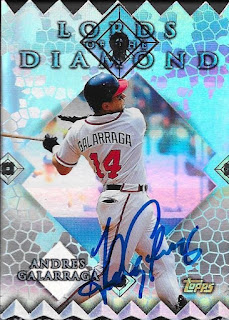 This 1998 Topps Lords of the Diamond card had a place in my TTM box for a long time.  I pulled it from a pack back when I was building the 98 set and kept telling myself that I really wanted to get it signed.  I missed an Andres Galarraga signing soon after, then had to wait patiently for another to pop up.  Meanwhile, I kept the card in my box, that way I knew exactly where it was when the signing did happen.

Finally, a signing popped up and I was able to move the card.  I'm glad I sent it out, because it turned out great.

Posted by William Regenthal at 9:30 AM