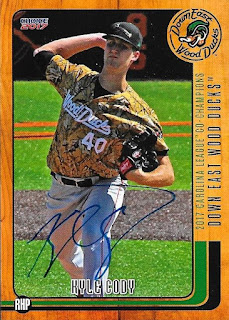 Getting Wood Ducks team set cards back TTM is always great, especially since I never thought I would get this one of Kyle Cody signed.  I had hoped I would see him one more time in Kinston, but I missed out.  Thankfully, he signs TTM, and I got my card done.  I like how Jim Perry Stadium in Buies Creek is shown on the card.  I was most likely at this game, then. 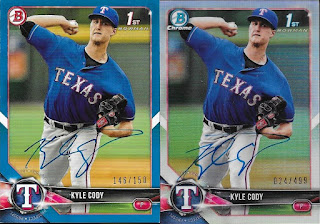 I also got these two cards from 2018 Bowman signed.  I wasn't 100% sure they would come back, so I didn't send anything too awesome.  I'm glad these came back, though, because it helped to reduce my pile of Cody stuff a little bit.

Posted by William Regenthal at 12:01 PM