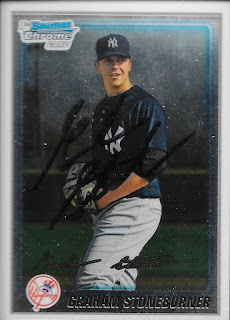 Now, that's a name!  I saw Graham Stoneburner's card in my Bowman box and thought that I really should try to add him to my autograph album.  The card turned out a lot better than the scan shows.  The card is a bit curved, which kind of messed up the scan in the first place.

I mailed to Stoneburner on January 21 and got the card back on February 1, for an 11-day TAT.