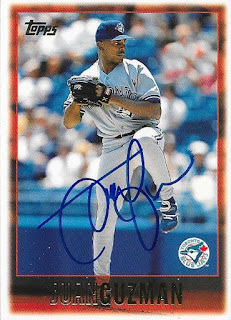 There aren't too many 1997 Topps in my autograph album, mainly because I have very few of those left over from when I built my 1997 Topps set.  So, when I'm able to find someone left in there who signs TTM, I try really hard to get one of those cards into the outgoing envelope.  I was really glad that I found this Juan Guzman to send off when I learned that he signed TTM.  The card looks great.

I mailed to Guzman on September 8 and got the card back on February 8, for a 153-day TAT.